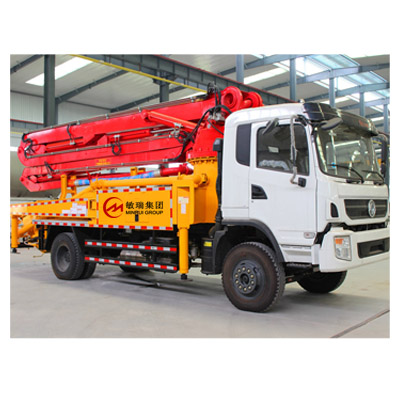 Concrete machinery used to be the most profitable and fastest-growing construction machinery product. During 2011-2013, excessive credit sales led to increased risks for listed companies. The sales volume of new pump trucks contracted significantly during 2013-2017. Although credit sales that do not control risks bring a surge in short-term performance, it is actually an overdraft for future demand, and at the same time, overdue accounts increase, bringing financial risks to production enterprises and distributors. After five years of market stock digestion and the integration of downstream customers, demand began to recover in 2017, and the profitability of concrete equipment is also expected to rebound significantly.

The development of China's commercial concrete industry has benefited from the national mandatory policy, thus driving concrete machinery. Since 2003, the state has successively introduced policies and measures to prohibit on-site mixing of concrete, vigorously promote the use of ready-mixed (commercial) concrete and ready-mixed mortar, and require enterprises that produce ready-mixed concrete and ready-mixed mortar to use all bulk cement to further save Resources, protect the environment. The commercialization rate of concrete has increased from 18% in 2006 to about 42% in 2013, and is expected to reach 65% by 2020.

The sales volume of concrete machinery is closely related to the growth of sales volume of commercial concrete, so now the market is also worried about strict control of local debts, will it affect the demand? Through analysis of infrastructure, real estate, and PPP storage projects, we believe that infrastructure investment has remained stable and PPP storage has decreased, but the real estate new construction rate will rebound slightly as inventory further decreases. In addition, the increase of the commercial mix ratio is superimposed on the steady demand. We assume that the commercial concrete rate will increase by 5 percentage points per year. In addition, the demand for concrete equipment mainly comes from renewal.

Distributor research to understand the situation will become our hypothesis for the following prediction:

1) Most of the used pump trucks in most provinces have been processed, and there are currently shortages of mobile phones and new machines. It is expected that the sales volume of pump trucks will increase by more than 50% in the first quarter.

3) The demand for downstream concrete is relatively stable, and the demand for equipment mainly comes from the update. We assume that the commercial and mixed growth rate will be 5% in the next two years to measure the number of pump trucks.

4) Pump trucks are usually updated in 8-10 years, and mixer trucks are updated in 6-8 years. Environmental protection policies will accelerate vehicle updates. The peak of pump truck updates is expected to be in 2018-2020.

We predict that the demand for pump trucks can be restored to 5000-6000 units in the next two years. In 2017, there were about 52,000 pump trucks, and it is estimated that about 40,000 pump trucks will actually work on the market. Due to the severe shrinkage of pump truck sales in 2014-2016, the number of pump trucks even declined in 2016 and 2017, which deviated from the steady growth of commercial concrete. We can also make a simple and rough estimate. At present, the market has about 50,000 pump trucks, assuming that it is updated by 10% every year, and the annual demand is at least 5,000.